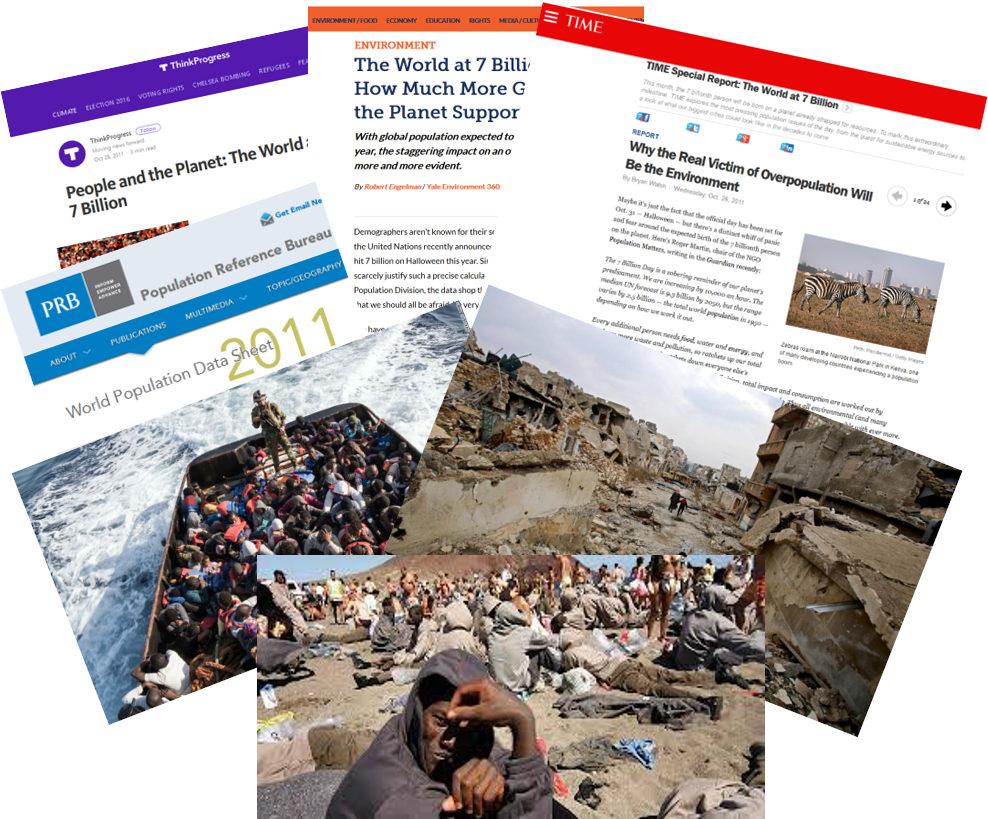 When the world population hit 7 billion in 2011, the leading theme in the global media was the big questions: how much more can the planet support? Only 10 years later, we already count 7,9 billion, so what has been done in the 10 years to win on time and on opportunities to exist and to balance the system we call home? The sad truth is - not a lot. And no one can say we did not have the time, or the science, or the proof or the knowledge, or the data so that we could act.

Climate change has been scientifically proven as an already irreversible process in the 1960s. The scientific community produced the evidence, but also the scenarios and among those, the possible solutions to act, to react, to slow it down and to prevent the devastating symptoms of it which we observe today. 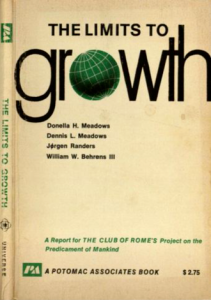 Around this time, in 1972 Donella and Dennis Meadows published “The limits to growth” the first comprehensive study, which analysed the available global resources in their advanced scarcity and the time limits till their complete exhaustion, one effect of which would be the limitation of technological progress and standard of living.

At the beginning of the millennium, the resource flows were still mainly linear and “single-use” resource utilisation the standard as Prof. Thomas Graedel from the university of Yale has demonstrated in the revision of Meadows findings three decades later. The message: it is getting worse [1] 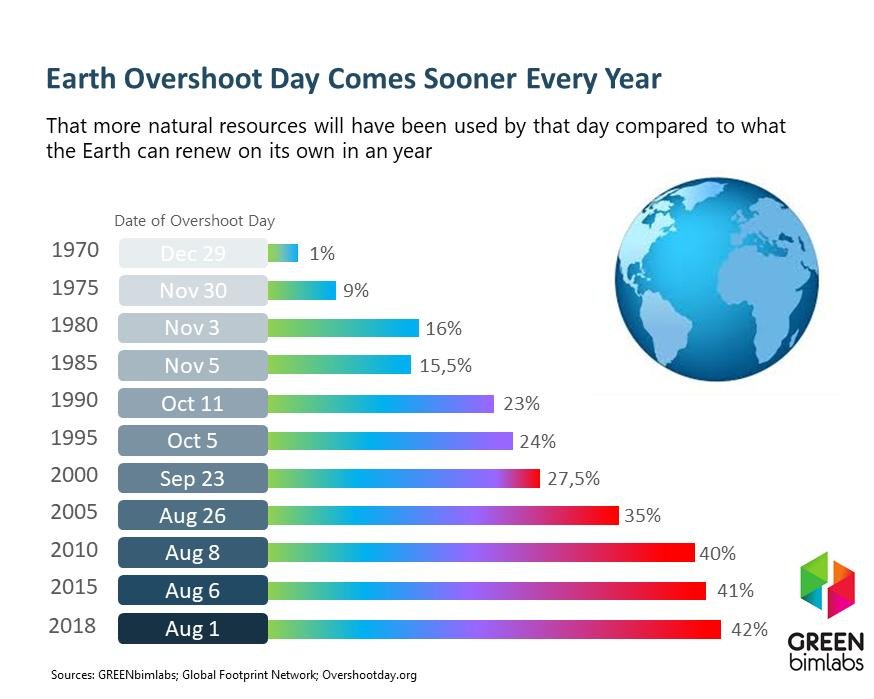 That much worse: around the time when Meadows published their fundamental work, the global footprint network began estimating the Earth overshooting day. This is the day on which humanity has consumed more resources, than can be recovered naturally or trough closing of resource cycles. This means that every year after this day, humanity consumes more than can be recovered. The alarming tendency: in 2050, the Earth Overshooting day is already on the 1st of January….how would the world in which we will live in look like then? Like this? 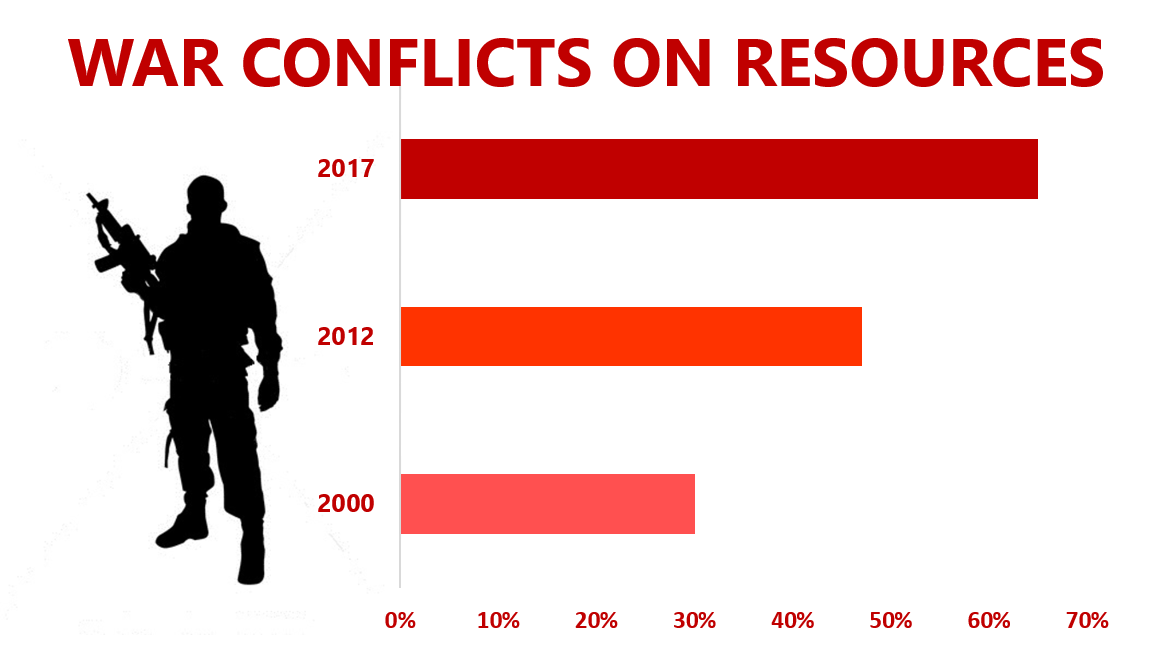 This is indeed one of the devastating manifestations of this development is the exploding number of war conflicts on resource and the control of resources: While at the beginning of the millennium “only” 30% of the war conflicts worldwide could be directly connected to the war on resources, in 2012 the were already 47%, in 2017 – 65%. [2]

Climate change and resource scarcity are only two of the manifestations of the way we are handling our only home.

In the quest of finding and utilising resources -be it in the form of materials or as agricultural or living land – we have modified and changed almost the entire surface of the planet. Just days before Earth’s Day, scientist have estimated, that there are only 3% of the Earth surface left, which are unblemished by humans. [3]

Most alarming: we continuously destroy the only active weapon we have against climate change. The lungs of the Earth, the Amazona rainforest has been reduced by almost 20% in the last decades. Alone in 2019, more than 400.000 hectares of forest have been destroyed in wildfires. The WWF have estimated, that in the last years, we have lost the equivalent of 30 soccer fields of forest every minute. [4][5] 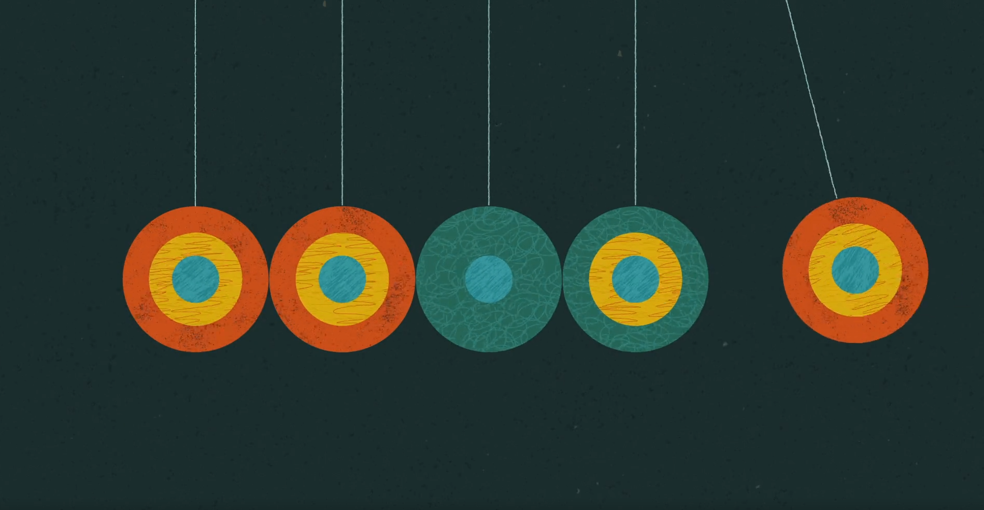 Climate, resources, weather, biotopes, forests, ocean streams, only few of the earth subsystems which keep the entire clockwork Earth in balance. But is it? In one of the most watched TED talks of 2020, Johan Rockström explains the extent of damage already done to some of the critical systems and how close we are to irreversibly destabilizing Earth. (Watch full video here: 10 years to transform the future of humanity -- or destabilize the planet )

Clearly, we have a problem. So, what can we do?

p.s. The first Earth Day was in 1970 when 20 million Americans - at the time, 10% of the total population of the United States — took to the streets, parks and auditoriums to demonstrate against the impacts of 150 years of industrial development which had left a growing legacy of serious human health impacts. It came as a fruition of the work of senator Gaylord Nelson, who, with many others, witnessed first-hand the ravages of a massive oil spill in Santa Barbara, California in January 1969 and vowed to bring the fight for the environment onto centre stage and suggested a proposal for a “national teach-in on the environment” to U.S. media outlets.

Here you can read about the full history of Earth Day: https://www.earthday.org/history/

Back to All Blogs